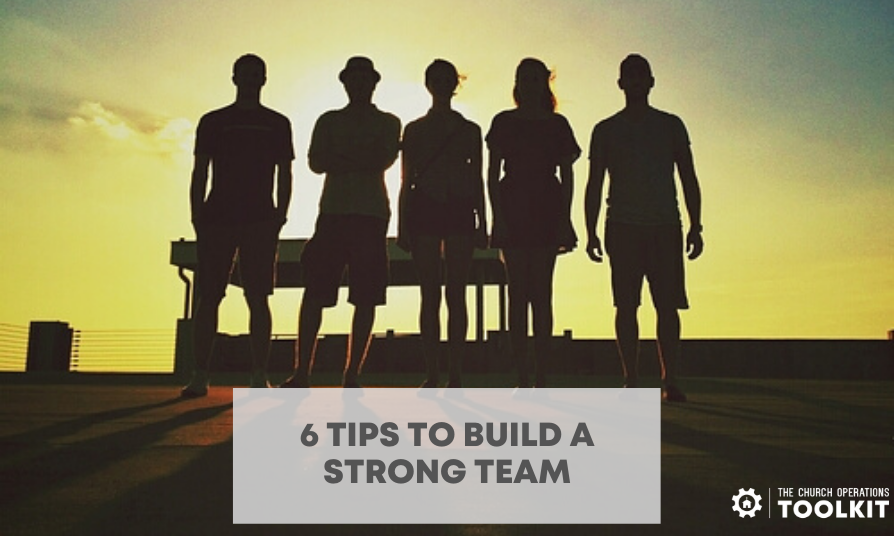 6 Tips to Build a Strong Team

Leading a team can be extremely rewarding or frustrating (sometimes a bit of both). From personality conflicts, communication misfires, and different (and often very strong) opinions, getting a group of people to head in the same direction on a consistent basis isn’t easy…even in a church context. When I first got into project management, I made my fair share of mistakes leading teams. I was so focused on tasks and due dates that I initially alienated certain team members who felt my approach was a bit harsh (spoiler alert: they were right). Thankfully, my leadership skills improved and I’ve learned a bit about how to build a strong team.

Use these tips to build a strong team:

Each individual on the team has their own personality, skillset, working style, communication style, family dynamics, and other unique characteristics. You could approach two people with the exact same request, body language, and speaking style. One may respond with enthusiasm while the other wonders why you were so abrupt.

If you’ll take the time to understand each person, you’ll be better equipped to communicate with and get the best work from each. When your team members know you care about them as much more than just worker bees, they’ll respect you more. They’ll also be more willing to go the extra mile when needed. You’ll cultivate a family, we’re-in-this-together, environment when you know each person as more than just by title or talents.

#2 – Admit you’re not an expert in everything

Value the talents of those on your team – especially talents you don’t possess. If you don’t have an eye for website design or aren’t well-versed in childhood development, express how much you value those on the team who have those skills. You don’t have to be an expert in everything. However, if you try to pretend you are, your team will see right through that and you’ll lose credibility.

#3 – Establish an “open debate in private, support in public” culture

Since you don’t know everything and hopefully hired people who are good at stuff you aren’t, listen to them! Ask for input, run ideas by your team, and get their honest reaction.

Don’t berate or punish someone if they tell you they don’t think your idea is a good one and why. Yes, it’ll sting a bit but it’s better to hear that from your team than from the entire congregation if the idea flops.

Obviously, each person should participate in debate and feedback with respect and kindness. Don’t be afraid of disagreement behind closed doors within the team. Talk through the pros and cons, various options, and decision-making criteria. Then, once you’ve made a decision, expect each team member to support it as soon as they leave the room.

I hate to break it to you, but you’re going to make mistakes.

I’ve made plenty and have had to eat my share of humble pie. When I’ve messed up, what’s kept me from losing all credibility has been my actions afterward.

As soon as I realize (or am told about) my mistake, I apologize…profusely. I ask for clarification and listen intently so I can understand where I went wrong. Then I make whatever immediate changes are necessary and thank those involved for being gracious with me.

As a leader, you need to model humility. If you don’t own up to your mistakes, you can hardly expect your team to when they mess up. Show them how to handle those moments and set the standard for your team.

When you have a team member who’s being belligerent, rude, or disrespectful (to you or other team members), you need to deal with that immediately. It’s best to not confront the individual in front of the team, but make a point to talk with him or her ASAP.

Start by asking questions such as, “How’re you doing today? Is everything okay?” or “I got the impression you were a bit frustrated in this morning’s meeting. What’s bothering you?”.

The reason I recommend starting off with neutral questions as those are less likely to put someone on the defensive.

The next key is to listen carefully to the response.

Find out what’s really going on and then continue the conversation. You’ll still need to address the issue of being rude or disrespectful and set expectations for future behavior. However, knowing the context of why a team member reacted a certain way can be helpful.

The rest of the team doesn’t have to know if you confront the issue or not, but they’ll catch on quickly if this person continues to get away with poor behavior. It’s demoralizing to the team when they have to deal with this person plus it sets a bad example. Confrontation isn’t fun but it’s a vital responsibility that leaders must take seriously if they want a strong team.

Every church has intense seasons where it’s all hands on deck usually with extra hours at the office.

You’re also coming into contact with people at very difficult moments in their lives:

This all takes a physical, emotional, and spiritual toll on church staff.

That’s why it’s important to carve out time to relax and have some lighter moments together. Go out to lunch, take your team and their families out to a movie and dessert, or give everyone an extra day off after a big event.

Your team members want to be known, understood, appreciated, trusted, and valued. They’re looking for your approval.

Get to know each member of the team, respect the talents God gave them, be honest about your struggles, and encourage honest debate.

Whether you lead a team of 2 or 20, these tips can help you develop a strong team, prevent or reduce conflict within the team, and accomplish more together.

Please log in again. The login page will open in a new tab. After logging in you can close it and return to this page.