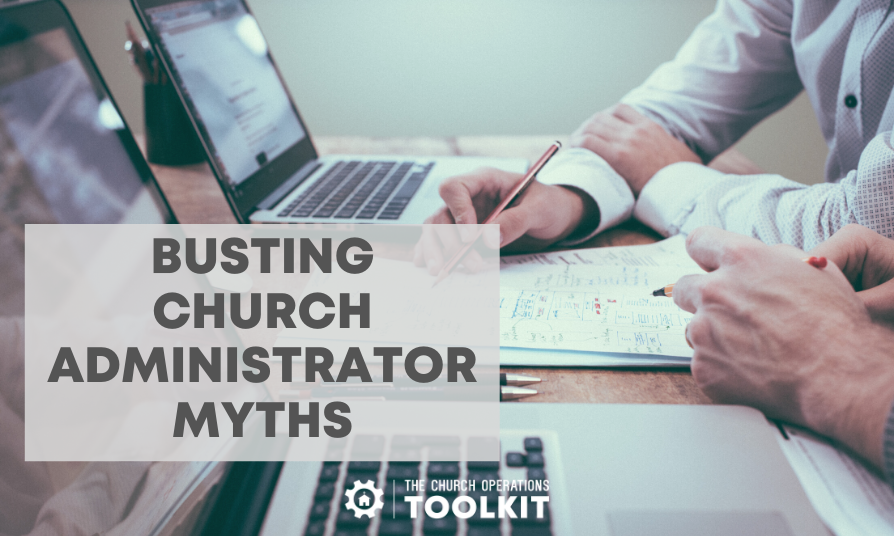 One way to thrive over the long-haul in ministry is to do more of what God gifted you to do and less of everything else. Many times, that means bringing people onto the team who can handle certain responsibilities for you. For example: If you’re passionate about preaching and counseling but freeze up anytime someone mentions developing a plan or a budget, a church administrator could be the perfect fit. However, church administrators tend to be misunderstood members of the church team, so I think it’s time for some myth-busting.

Perhaps I’m a bit biased since I once worked in a ministry’s Finance department, but I think church administration folks are awesome! They keep many wheels turning in the background that support what happens on stage and at the altar each week. If you’re a pastor without someone (or a team of people) filling the church administration role, you’re likely feeling the strain from trying to do something you neither enjoy or are gifted to do.

Here are a few myths about church administrators:

Myth #1: All they care about are policies and procedures

Yes, your church administrator is probably a stickler for certain processes (purchase requests come to mind!). However, it’s not because he thinks policies are the best thing ever…he’s simply trying to keep things running smoothly.

If you don’t have a documented process for spending church dollars or for adding new members to the church database, you’ll see the downstream impacts.

Too much spending one month could lead to not being able to make payroll the next (trust me…you won’t like that one!).

If new members aren’t added correctly to the database, you’ll end up with multiple versions of them in the database or with each staff member who’s contacted them for volunteering or small group membership with their number on their cell phone. That’s not the end of the world, but it’s much more efficient to update information in one place instead of ten.

What your church administrator really cares about is the same thing you do…people! They want ministry to happen for people to come to Christ, to become part of the community of believers, and to grow in their faith. They’re using their God-given talents to achieve that goal…it just looks different from yours.

Myth #2: They relish the chance to squash your latest ministry idea

If you’ve been turned down for renting a massive bouncy house plus paintball guns for a new youth event, yeah…you should’ve seen that one coming. Your church administrator doesn’t want a kid to be mid-bounce when the whole thing deflates from an errant paintball hit. She’s a bit safety conscious and is actually looking out for you (and your future employment). She doesn’t want to kill your idea; she just wants you to adjust it so everyone goes home in one piece. That’s actually pretty sweet of her, isn’t it?

Myth #3: Church administrators are all about the Benjamin’s

They’re the money-counters and record keepers; so sure, it looks like that’s all they focus on. However, that’s not even close to the truth. What they care about is making sure the church is being a good steward of the money God (and the congregation) entrusted to it. It’s actually a good thing they’re meticulous about the security and accountability involved in recording the offering each week along with how money is spent.

Okay, so it might be true that the church administration role attracts introverts. However, introverts aren’t antisocial…they just prefer interacting with small groups instead of big crowds. Invite your church administrator out for lunch with you and maybe 1-2 others. Do that a few times and once he’s warmed up to you, you might not be able to get him to stop talking. What’ll really be fun is when you hear his passion for ministry (see myth #1).

Hmmm…okay, so maybe this one isn’t a myth after all. But hey, it’s not that they LOVE these things, it’s that they know how these tools can support ministry. So the next time your church administrator geeks out about a new Excel formula, encourage her.

“Hey, that’s awesome you got that formula to work and can calculate cash flow for the next 8 weeks in under ten seconds!”

“Wow, you created a project plan with how many tasks for the couples’ retreat?! That’ll make putting it all together so much easier.”

Even if you have no idea what she’s talking about, support her as she uses the gift of administration to make your job a bit easier.

Church administration involves details, numbers, planning, coordinating, and lots of lists. It may not be your cup of tea, but it truly does support and make ministry possible. So while you may never fully understand what your church administrators do, be thankful that they are on the team. Their efforts may just save you from burnout as they plan and coordinate with you.

Church Administrators – What other myths or misperceptions have you seen regarding your role in ministry?

Please log in again. The login page will open in a new tab. After logging in you can close it and return to this page.